Russia is snow and Dr Zhivago to me but for now I’ll take you back to mid summer. (Above illustration, the Singer building)

We arrived in Saint Petersburg half way through the White Nights festival, which runs from June to mid July. Twilight then lasts between 11 00 pm – 3 30 am; never really getting dark, the sun seeming to bob along the horizon. It’s a very European feeling city and on the surface a tolerant place and inwardly confident.

High end European cars are everywhere, driven around the city at frightening speeds, only intrepid babushka’s daring to cross the road off piste. When I was last here in1993 it was a city of faded grandeur and smokin Lada’s,”not the fridge kind” and uniformly lit, with no neon or advertising, unlike today. We found plenty of good places to eat, vegetarian too and the coffee was superb washed down with local honey cake.

(Illustration below, the Finland Station) I love Russian history and so much of it is tied up in it’s architecture. Russia is currently refurbishing a lot of the Tsarist palaces,

Many were burnt down or looted over the last 100 years. They sit comfortably alongside the Stalinist/Soviet architecture and the futurist and now tallest building in Europe, the Lakhta Center

Statues are everywhere in Saint Petersburg, none more striking than Lenin outside the Finland Station. He arrived there from exile in Switzerland in April 1917: Biding his time before the overthrow of the provisional government by the Bolshevik’s in the October Revolution.

(The train is preserved in a glass box on the station platform just like the man himself in his marble mausoleum in Moscow’s Red Square).

Polo Regatta Hotel on the Gulf of Finland Saint Petersburg

(Illustration below, the Polo Regatta Hotel)  No information available apart from on Booking.com and Expedia 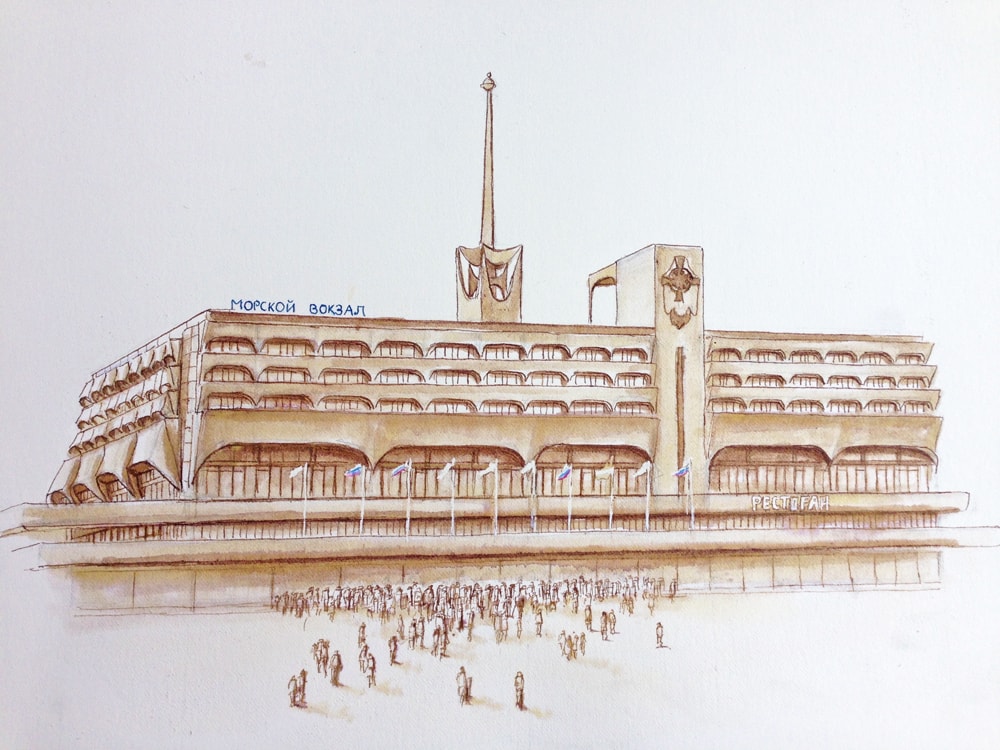 We visited this hotel on the seaport as it looked ‘proper’ Soviet. Staff there looked bemused that we wanted to explore the building but not stay. A cruise ship had just docked, off loading colourful  tourists, helping soften the brutalist architecture with their fashions. Close by is the Saint Petersburg  museum of contemporary art, the Erarta which we called into on route to the State Hermitage museum. (What a delight) Room after room of surprises, Soviet art amongst modern and not at all sanitised. The photography was particularly powerful capturing the ordinary lives of Russians, all ethnicities. “Well worth a visit”. A little overdosed on art we headed by tram to the State Hermitage museum, home to the largest collection of paintings in the World and 2nd in ranking in size after the Louvre. We marvelled at the breathtaking beauty of the building, inside and out. It’s so vast you can find yourself alone in some of the rooms and the next moment trapped by hordes of coach parties,.  Next stop the station, for the overnight Grand Express to Moscow

Moscow on arrival felt more Russian than Saint Petersburg, you could see it in the faces .In both Cities, the majority of people live in  apartment blocks, detached houses with gardens are rare. “Trees fill the spaces of gardens”. Moscow has plentiful civic spaces and parks, all beautifully  maintained, (no litter and only tiny bins).  Taking an underground train in Moscow is an opulent  experience, you go down into some of the deepest stations on the planet: Adorned with mosaics chandeliers and bronzes, helping lift spirits to what is essentially a hum drum daily chore. Summing up Russia, it’s not at all recognisable to how it is presented from a UK perspective, sure enough it’s faults aren’t on display but that’s not unusual to any Country! The illustration on the right is the Moscow State University building, one of Stalins Seven Sisters dotted around central Moscow.